The Power of a Suit

I loved this recent article in the Wall Street Journal about the power of Christina Binkley’s lucky suit.  Not because I’m a fan of St. Johns–I’m not.  Too difficult to pull off and, in my opinion, too dowdy.  And not because I advocate spending that much on a suit–it would be fun but it’s unnecessary.

I love this article because Christina has a great outfit in her closet that clearly makes her feel on top of the world, confident, and successful.  My theory is the “maître d” can’t tell a St. Johns from a Saint Smitherstein but he can clearly identify confidence and the power that goes with it.

Find your own power suit and wear it to your next important meeting, interview or speaking engagement and rock the house.

The Suit That Turns Me Into a VIP

A Splurge on St. John

Shows What You Can Get for the Price of Luxury;

Best Table in the House

Maître d’s are expert decoders of social rank. When I dine with CEOs at Michael’s in New York or Spago in L.A., we score the best tables. On my own, I wind up seated near the kitchen doors.

Unless I wear my St. John suit.

It is very understated, with no logo. The navy blue knit tank dress hits right at the knee. A zipper up the front of the jacket adds a modern edge, but the look is timeless. That is what St. John is famous for — and it is why the brand is often disdained by the trend-conscious fashion cognoscenti.

Yet when I wear my suit, maître d’s snap to attention, sales clerks rush to assist me and people I barely know offer me favors.

What is it about the cut of certain clothes that signals “VIP”? Men’s Brioni suits and Charvet shirts are famous for it. Bottega Veneta and Akris have it. Their head designers can tell you the fabric cost the moon and the tailor apprenticed for three years, but it’s more difficult to define what conveys the effect of Somebody. As with pornography, you know it when you see it. Delivering that cachet — that power — is the promise of the luxury business. 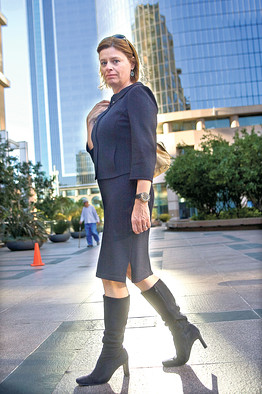 Fashion prices can seem extreme, but when Christina Binkley bought a St. John outfit, she discovered the power of some luxury clothing to transform the wearer.

It was curiosity about these questions that led me into the boutiques on Fifth Avenue in the summer of 2007, shortly after I began writing this column. Comfortably middle-class, I had shopped for years at the likes of Saks outlet Off Fifth, Banana Republic and Zara. My mom raised me to believe clothes should be comfortable and practical, not frivolous.

At Versace, I tried on a $1,100 white cotton blouse with ruffles down the front. I exited Versace as I had entered — empty-handed and skeptical.

Just up the avenue at the St. John boutique, a salesman helped me select a half-dozen jackets and dresses. The ensembles cost a couple thousand dollars apiece — a steep price, but only a third the cost of similar outfits at high-fashion brands like Chanel and Akris. My salesman arranged it all in a vast dressing room and hovered outside the door. An hour later, I emerged from the store with the most expensive items of clothing I have ever purchased. I felt shock, shame, pleasure: The suit hadn’t even been on sale.

The cost of luxury can seem outlandish — particularly now, in an uncertain global economy. Clothes are particularly hard to value. While cars and high-tech gadgets — Maseratis, Audemars Piguet watches and first-generation iPhones — offer not only performance but the cachet of a visibly rich item, clothing does less to convey what you spent on it. Clothes get stained and snagged, and they go out of style quickly.

But clothes also have the power to transform you. Clothes “can be used to beguile, seduce, mock, lie and deceive,” semiotics professor Marcel Danesi says in his book, “Of Cigarettes, High Heels, and Other Interesting Things.” He adds, “Criminals can dress in three-piece suits to look trustworthy.” Designer Marc Jacobs this year was asked to leave a Chelsea art gallery when an employee mistook him for a homeless man. The iconic designer’s clothes apparently signaled “soup kitchen.”

Most important, clothes can speak the secret language of status. In one of my early forays in my St. John suit, I dropped my kids at school on my way to work. A mom I’ve known for two years stopped me outside the building and exclaimed, “Wow. What do you do for a living again?” At the office, a colleague complimented my suit and asked, “Did it cost $1,000?” (I dissembled. If only.) 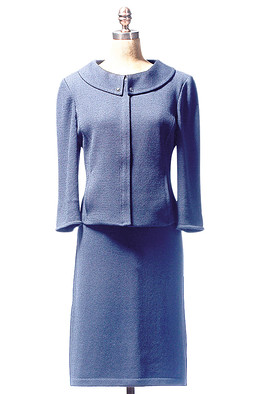 My suit and I got on a plane and drew the attention of a passenger in an ostrich-skin baseball cap and matching boots. It was Pete Rose. The baseball legend wound up telling me where I could get boots just like his — flipping open his cellphone to display the number for Friedman’s Shoes in Atlanta. “All the athletes shop there because he has big sizes,” Mr. Rose confided.

As a woman at midlife, I find that if I want notice, I must command it. Waiters can be slow to respond to my black Banana Republic pantsuits. But they “ma’am” my St. John. Store clerks glide over to offer coffee while I browse. Maitre d’s offer hangers for my jacket. A gentleman insisted on carrying my luggage onto a plane at JFK airport — a chivalry he surely wouldn’t have offered to my Lucky brand jeans. Is it my imagination, or do New York cab drivers pick me and my St. John over other hailers during rush hour?

At New York’s fashion week last February, I sat outside the Bryant Park tents in my St. John, talking on my cellphone. A photographer began shooting pictures of me.

I don’t think people recognize the label. My suit doesn’t have the boxy shape, tweedy fabric and decorative touches of the traditional St. John’s suit.

But the suit does have a good fit, strong workmanship and non-trendy style. Glenn McMahon, chief executive of St. John Knits Inc., says my jacket is known as the “Angelina” after former St. John model Angelina Jolie. Spun, dyed and knit in Irvine, Calif., St. John’s signature wool-blend yarn has a patented twist that gives the garment memory so it doesn’t wrinkle in suitcases or get baggy when worn. It can be “blocked” into a new size or shape, if mine should change. As a result, my suit rarely needs dry-cleaning, and looks as good at the end of the day as it did at sunrise.

These days, getting value for money is more important than ever. But spending money on hot designers doesn’t guarantee you’ll impress others. My green-gray Marni suit, which cost about $675 at the brand’s Milan outlet, garners compliments but no restaurant-table upgrades. My cropped Stella McCartney jacket, $304 on sale at Barneys, has led to no adventures.

But recently, a friend gave me several hand-me-down Chanel jackets and they, like my St. John, stop sales clerks in their tracks.